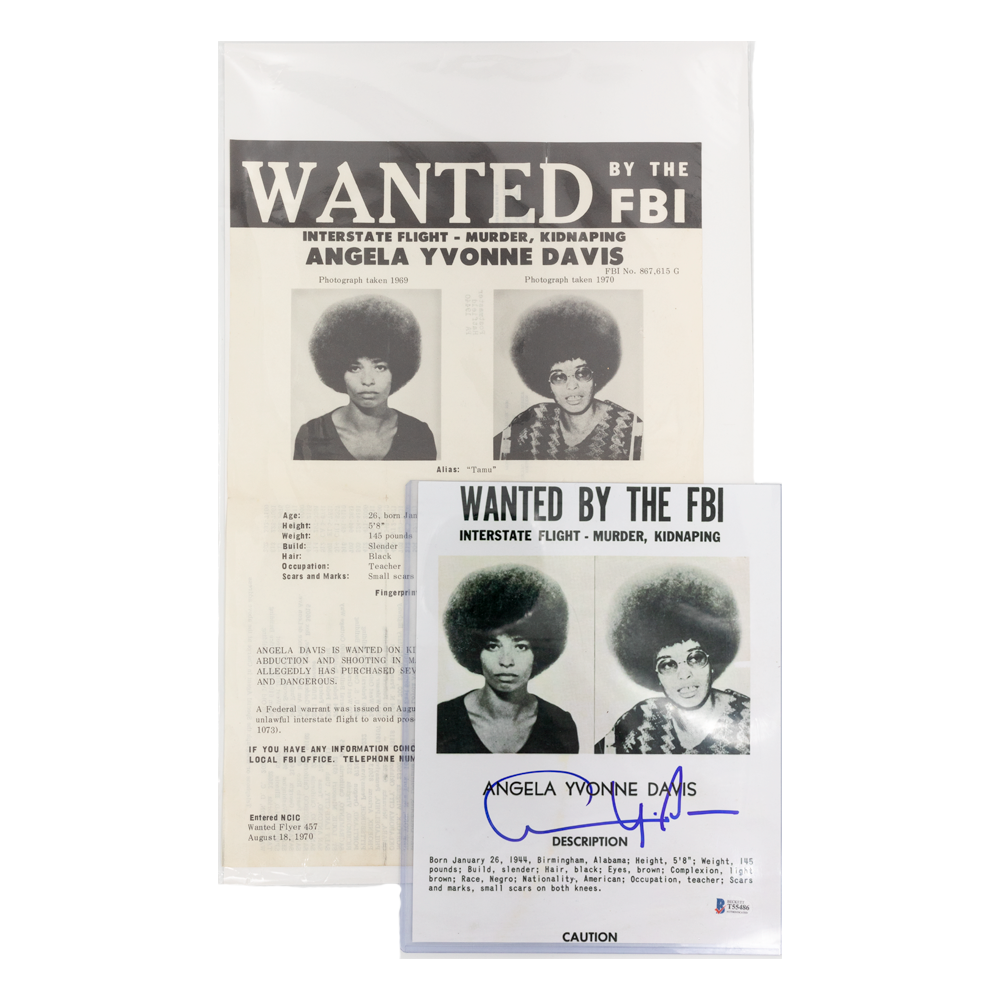 A one-time price of $2,200.00 will be added to your order.
1 Left in Stock
Categories: Counterculture Posters
Manufacturer: Bynx LLC

Washington DC: August 18, 1970. First Edition. First Issue, with the earlier date of August and no printed fingerprints. 10 ½” x 15 3/4”. One horizontal and two vertical original fold lines for mailing. Front has images of Davis, along with charges, warrant information, and facsimile signature of FBI Director, J. Edgar Hoover. Back of poster includes contact information for domestic field offices and shipping address to the Postmaster of Hatfield, PA. VERY GOOD. Minor offsetting at the foot of the poster and a pinhole at the horizontal fold, not affecting the poster text. Well preserved historical artifact. RARE. Also included is a certifed, signed laminate copy of the top portion of the poster.

The third woman in history to be placed on the FBI’s Most Wanted List, Angela Yvonne Davis was charged with these crimes due to her involvement in the events of August 7, 1970, which resulted in the death of Judge Harold Haley. Three black men, known as the Soledad Brothers, were being tried in Marin County courthouse when 17-year-old Jonathan Jackson entered the courtroom, armed the three inmates, and kidnapped Judge Haley. A shootout occurred during the escape, and Haley was killed. Davis had been a supporter of the Soledad Brothers, and had helped to purchase some of the firearms that Jackson used. As such, a warrant was issued for her arrest and she was placed on the FBI's Ten most Wanted Fugitive List. Davis was captured in October, and her trial began in January 1971. As legal arguments unfolded in California, an international movement coalesced around her. Within a year, organizations such as Black People in Defense of Angela Davis would boast over 200 chapters in the United States and 67 abroad, while Davis' cause would be taken up by celebrities from John Lennon and Yoko Ono to James Baldwin, with individuals making material and immaterial contributions towards her release. The jury ultimately found her not guilty.

Born in 1944 in Birmingham, Alabama and raised in "Dynamite Hill," where the Ku Klux Klan tried for many years to bomb Black families out of the neighborhood (npr.org), Angela Yvonne Davis learned the value of resistance at an early age. "I grew up in the southern United States in a city which at that time during the late '40s and early '50s was the most segregated city in the country," she would recall. "In a sense, learning how to oppose the status quo was a question of survival." Davis opposed that status quo by marching against segregation with her Birmingham Girl Scout troop and joining a communist youth group while still in high school. Davis landed in Greenwich Village in the early 1906s at a pivotal moment in history and her own life alike, the teenager dove headfirst into the politics, ideas, and aesthetics of a burgeoning counterculture. Her formal education would take her to Brandeis University, the Sorbonne, the University of Frankfurt, the University of California, San Diego, and the Humboldt University in East Berlin where she earned a doctorate. As a young philosophy professor at UCLA, Davis would face two drives by the Board of Regents to have her removed, first owing to her membership in the Communist Party, and second over "inflammatory" speeches that included "repeated characterizations of the police as 'pigs.'" Her academic career survived both campaigns, but in 1970 Davis found herself on the run for her non-academic life, due to the Soledad Brothers Incident.

Davis remains an outspoken and influential voice in the endless pursuit of Black American equality.